In this post, I introduce you to MongoDB and how to install the C# driver. Then I show how you can insert documents into the database.

MongoDB, classified as a NoSQL database, is a document-oriented database system which stores data in JSON-like format. MongoDB represents JSON documents in a binary-encoded format called BSON behind the scenes, and the MongoDB BSON implementation is lightweight, fast, and highly traversable. This means that MongoDB gives users the ease of use and flexibility of JSON documents together with the speed and richness of a lightweight binary format.

To get started, fire up VisualStudio and create a new project. I'll be working with a console project for this tutorial. To install the driver, we'll go through NuGet and pull down the packages needed. There are three NuGet packages needed, and they are:

Run the following command to get all three packages installed at once:

To connect to a database we use the MongoClient class to access a mongodb instance and through it, select the database we want to use. This class has four constructors.

...or using the static Create method from the class:

Generally, you'd usually use the one constructor with the connectionString parameter, and we'll use this for this tutorial. I'll add an async method within the Main method because we'll be working with the async methods from the driver. If you're coding along, add the following code to your Program.cs file:

Now run the application and see that it successfully connects to the mongodb instance on that port; and from the console, you can see how many connections are open. 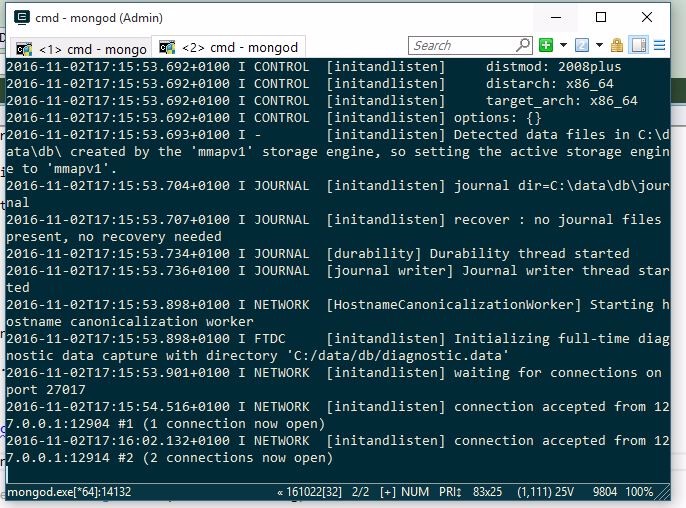 With MongoClient instance, there are a couple of things we can do like drop a database, get a database, or retrieve a the names of databases on the server. There is none for creating a database because once you pick a database and insert data into it, it automatically creates the database. 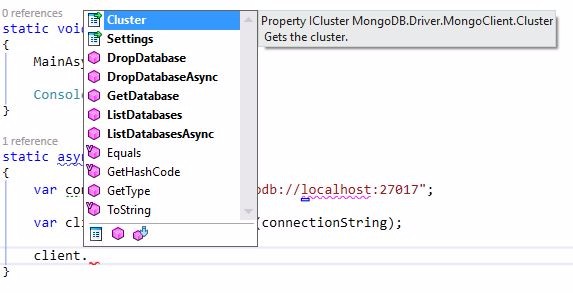 The one we're interested in is the GetDatabase method which will automatically create a database for us. So let's go ahead and fetch a database called school for which we'll work with:

The GetDatabase method returns an object which is a representation of a database, from which we can access different collections and manipulate the database. The MongoClient object is thread safe, so you can put it in a static field, make it a Singleton which you can get anytime through your DI container, or instantiate a new one using the same connection settings (which underneath will use the same connection pool); and through this object, you can pick any database you want to work with. I personally do have it as a Singleton registered to my chosen DI container.

With the database object, you can create, rename, retrieve, or get a list of collections from the database. Documents are stored in collections, so you can think of a collection as a table and documents as records in a table, if you're coming from the SQL world.

To create a collection, we use the CreateCollection or CreateCollectionAsync method of the IMongoDatabase object. This method takes in three parameters (of which the last two are optional):

Most of the time, we just want to create a collection and leave the options at its default, by setting just the name of the collection.

Another way a collection can also be created is using the GetCollection which accepts a name for the collection and an option collection settings as parameters. With this method, even though a collection of that name doesn't exist, it'll go ahead and create that collection once a document is being created. This would typically be the way you want to go, and would only use the create variant when you need to create a capped collection.

A capped collection is a fixed-sized collection that automatically overwrites its oldest entries when it reaches its maximum size. The GetCollection method is generic and you need to specify a document type when calling this method. The type represents the kind of object/document we want to work with. This could be strongly typed to any class we define, or use the BsonDocument type to represents a dynamic schema allowing us to work with any document shape in the collection.

The BsonDocument is a type from the MongoDB.Bson package which represent a BSON Document and with this type, we can work with any shape of data from the database. This package contains all the basic BSON types and a few other things for working with BSON.

Within this package, we have classes that represent BSON types and how to map between .NET types and BsonValues. A few of those are:

The BsonDocument is a dictionary of string to BSON value, so we can initialize as we would any dictionary:

...or use the Add method which has a number of overloads:

To see this working, let's start a mongod instance from the command line and run the following lines of code while monitoring the events from the console:

Run the application and watch the console:

You will notice that it called the insert command and succesfully inserted one document (ninserted: 1) . Also, there is a synchronous version of this method:

We can also insert multiple documents at the same time using the InsertMany or InsertManyAsync methods. Assuming we have three new students in the school, we can insert all at the same time using this method and they will be inserted in one batch (assuming you're using MongoDB 2.6 or higher). To see this in action, we move on to updating our code base and running the application:

From the console, you can see that it issued an insert command for three documents and successfully inserted all of them. Aside from working with the BsonDocument, we usually know beforehand what kind of data we want to work with and we can create custom .Net classes for them. Following our example of working with the students collection, let's create a Student class and insert new students represented using this class:

With the code above we can change the document type for the collection to the new class, and call the insert method. To see that this works, let's run the application and monitor what happens from the console.

And from that, we can see that it actually does insert the documents. Having looked at all this, I certainly hope that some basics of the .Net driver is clear and we know how to insert document(s). In the next part, we'll walk through retrieving documents and the various ways to build queries for that purpose.